The Tides Institute & Museum of Art (TIMA) campus, made up of eight 19th century repurposed historic buildings as well as additional properties owned by TIMA, is situated within the confines of Eastport, Maine. All of the buildings are located within a few blocks of each other in the community’s historic core overlooking the deep marine rich waters of Passamaquoddy Bay and the U.S/Canada international boundary. See the Campus Map to view the close proximity of the buildings to each other. These buildings, dating from 1819 to about 1890, preserve and reflect the region’s architectural heritage while repurposing them with 21st century activities and resources. They provide an important historic setting for TIMA’s extensive and wide ranging collections (they are a part of these collections) and programs. Four of TIMA’s buildings are listed on the National Register of Historic Places (including three that were designed by the same architect and built at the same time), six (including the four on the National Register) are part of Eastport’s local historic district, and two other TIMA buildings are located nearby in an adjacent historic residential area. They include:

Main TIMA building with historic 1889 water fountain in front that is also owned by TIMA. TIMA’s Masonic Building is at center right.

• 1. Tides Institute & Museum of Art Original Building. (1887)
43 Water Street. Three-and-a-half story cornerstone downtown brick structure (in center of photograph) designed by Boston and Saint John, New Brunswick architect Henry N. Black. Originally built as the Eastport Savings Bank using New Brunswick made brick and Nova Scotia sandstone, the building was threatened with destruction and named to Maine’s Most Endangered Places in 1997. TIMA acquired the building, its first, in 2002 and has been meticulously restoring the building. The building is part of a 30 building downtown Eastport National Register Historic District. The building now houses collections, exhibition space, and administrative offices. TIMA’s collections contain the original 1887 architectural plans for the building. The original cross section plan of the building can be see here: Cross Section Plan. TIMA also owns and maintains the 1889 cast iron water fountain that serves as the centerpiece of the small civic space in front of the building. The fountain was made by the J.L. Mott Ironworks Company of New York City.

StudioWorks building (right half of photo) with nearby TIMA main building a block away in the distance at left. 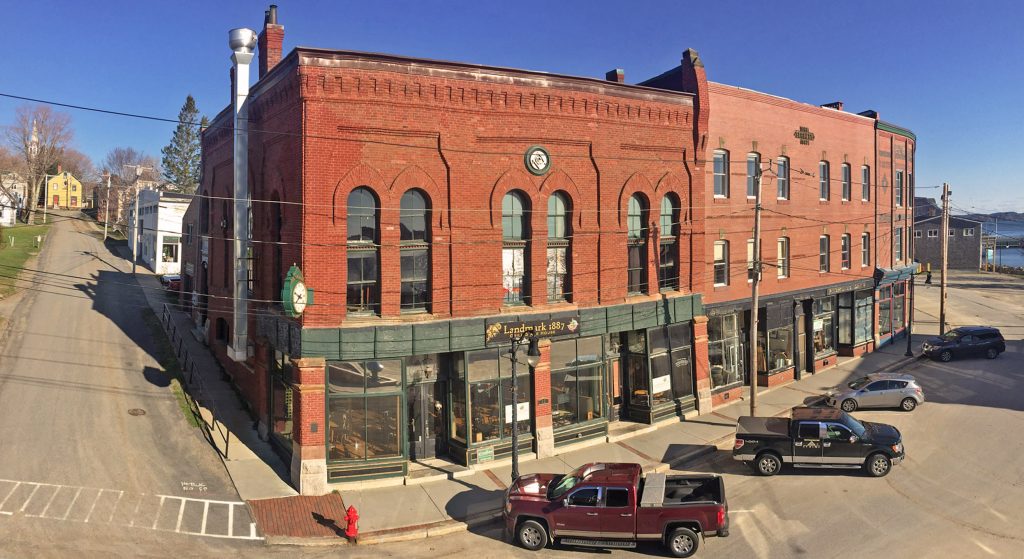 Masonic Block building (in center of photo) as seen from across the street from the third floor of TIMA’s main building. Steeple of TIMA’s Seaman’s Church can be seen in upper left distance along with TIMA’s Rathlin and Veteran Memorial Hall houses.

• 3. Masonic Block (1887).
32 Water Street. Three-story brick structure was built in 1887 and was also designed by Boston and Saint John, New Brunswick architect Henry N. Black. Originally built as the local Masonic Lodge Hall using New Brunswick made brick and Nova Scotia sandstone, the Masonic Lodge occupied the upper second and third floors of the building while Mildon’s variety department style store occupied the first floor. The building’s rear warehouse addition was built in the early 1930s to serve the Great Atlantic & Pacific Tea (A&P) Company that had then come to occupy the ground floor of the main Masonic Building. The A&P Company moved out of the building and to a new downtown location in the late 1960s. The Masonic Lodge sold and left the building in the early 1980s. TIMA purchased the Masonic Block in April, 2019 to preserve and repurpose it. TIMA is developing the building to include exhibition space, archive space, and working studio space that can double as business incubator space. The ground floor includes a developing restaurant space. The building is part of a 30 building downtown Eastport National Register Historic District.

• 4. Veterans Memorial Hall / Royal Art Lodge (c.1820).
6 Green Street. Initially built as a Baptist vestry in the early 19th century, the two-story wood structure long served as a Grand Army of the Republic (GAR) Veterans Hall (Meade Post, No. 40) following the American Civil War. For much of the 20th century, the building served as a hall for a successor veterans organization, the American Legion (Fred Mitchell Post, No. 11). The first floor of the building currently provides housing for artists in residence, as well as additional studio work space. The second floor is being restored as a Civil War Memorial Room and work space. It includes original wall paintings dating to the post American Civil War period when the building served as a GAR Hall. These paintings were uncovered during the restoration of the building by John and Alice Seelye who had purchased the building from the American Legion in 2009. They then donated the building to TIMA in 2014. The Veterans Memorial Hall / Royal Art Lodge property includes an adjacent vacant lot.

• 5. Rathlin House (c.1820).
4 Green Street. Rathlin House is located directly next to TIMA’s Veterans Memorial Hall / Royal Art Lodge Building. Little is known about the history of this two and a half story wood structure other than that it served as a private residence for nearly two centuries. Names of families living in the house included Cassidy in 1855 and Stetson in 1881. One of the last residents of the house was a descendant of a large number of Irish immigrants who came to live and work in this area in the mid-19th century from Rathlin Island off Ireland’s northern coast. Hence the house’s name, Rathlin House. The building was restored and the property was then donated to TIMA by John and Alice Seelye in 2015. The building provides housing for artists in residence, TIMA interns and other guests of TIMA.

• 6. Seaman’s Church (1828/29).
26 Middle Street. The Congregational Church, long known as the Seaman’s Church, was constructed in 1828, dedicated in February, 1829, with Daniel Low as local architect and builder. The building employs uniquely strong construction techniques not found elsewhere in New England. The original steeple of the church blew over in the Saxby Gale of 1869 and was replaced by the current steeple of different design. The original main sanctuary space (as shown in photograph) is very largely intact though the original balcony was enclosed in about 1890. The building is deemed “the finest example of federalist architecture in Washington County, Maine” and it has been listed on the National Register of Historic Places since 1976. The building and property were gifted to TIMA by the Congregational Church congregation in 2016. TIMA is developing the building for TIMA and other public talks, workshops, celebrations, and receptions; as exhibition space for maritime and architectural artifacts drawn from TIMA’s extensive collections; as an important feature of a walking tour of TIMA’s campus of historic buildings; and for other community events. The main sanctuary space can host an audience of up to 250 people. The small congregation continues to meet seasonally at the church building on Sunday mornings.

• 7. North Church (1819) Project Space.
82 High Street. The North Church Project Space building was originally built for the Free Will Baptist Society in 1819 when the then District of Maine was still part of the Commonwealth of Massachusetts. The building employs uniquely strong construction techniques not found elsewhere in New England and its interior columns display Georgian style influences. In 1881 the building was raised upwards and a ground level vestry space added beneath. Thirty-five years later, in 1916, during the 100th anniversary of the organization of the church, a series of stained glass memorial windows created by the Boston studio glass firm of Spence, Bell & Company were installed in the main sanctuary and balcony spaces. Soon after 2000, the building became abandoned. In 2014, the building was gifted to TIMA by the then successor church owners to insure the building’s preservation. The building is included in Eastport’s local historic district. The sanctuary space (as shown in photograph) contains a 23 foot high vaulted ceiling and remarkable acoustics (the best in the region) with a wide open ground level former vestry space below. The sanctuary space can host an audience of up to 220 people while the ground level former vestry space can host up to 50 people. TIMA is developing the building as an extension of its exhibition and artist in residence programs including performances, site-specific art installations, multi-media presentations, along with ground level studio and workshop space. A plaque on the wall of the main space notes: “This repurposed space is in honor of Bob Tuckett, Sr. and Polly Mattis Tuckett whose selfless love of family and community is remembered.” A custom made Schlicker chamber organ (not a church organ), designed for solo and ensemble Renaissance and Baroque music and obtained from Brooklyn, New York, was installed in the spring of 2018 in the rear addition of the building. The organ was originally built in 1961 by the Schlicker Organ Company of Buffalo, New York for noted American sculptor, Richard Lippold, of Locust Valley, New York. For additional information about the North Church Project Space follow this link: North Church Project Space. 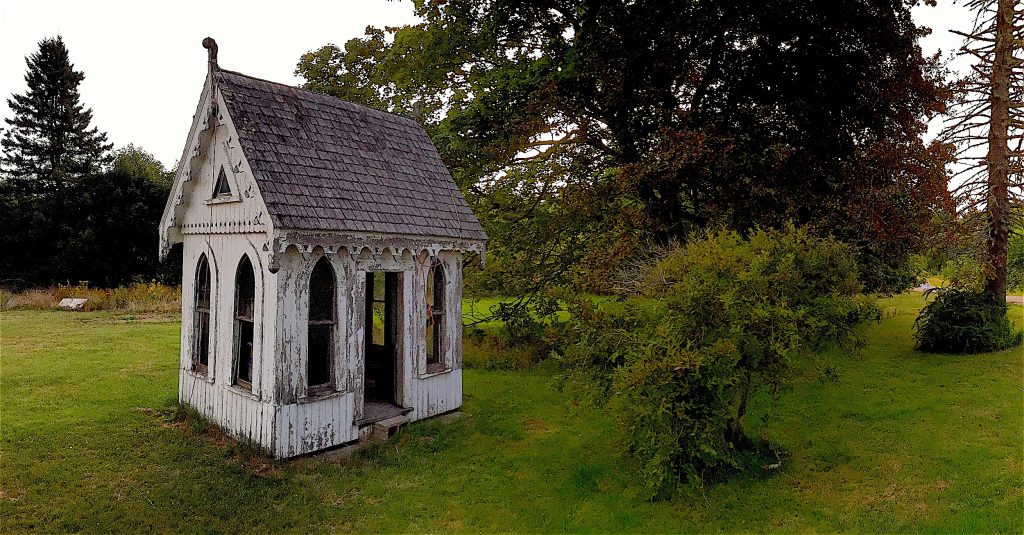 • 9. Deep Cove Park & Field Site.
Deep Cove. Located on the western side of Moose Island (Eastport), TIMA’s Deep Cove Park & Field Site provides opportunities for artists and others to work along and enjoy the shores of Cobscook Bay. Deep Cove is located about a mile from TIMA’s downtown campus and is easily accessible by foot, bicycle or vehicle. The park & site combines wooded areas, fields with a profusion of wildflowers, and extended views out onto Cobscook Bay. The park & site also provides shoreland and waterfront access to Cobscook Bay and beyond. The property was donated to TIMA by Coastal Resource Center in 1978. Shackford Head State Park is nearby.

TIMA owns and maintains an 1889 cast iron water fountain, made by the J.L. Mott Ironworks Company of New York City, that serves as the centerpiece of the City of Eastport civic space in front of the TIMA’s main building in downtown Eastport, Maine. The fountain was originally installed in 1889 in front of what is now TIMA’s main building. With the advent of the automobile in the early twentieth century, the fountain was relocated to Eastport’s Hillside Cemetery. There it remained until it was brought back to be placed very near its original location in 2005  as part of the new civic space. In 2015, the fountain was donated to TIMA by the then owners of the fountain, the local branch of the Veterans of Foreign Wars (VFW). The local branch was disbanding and the branch felt TIMA was the best hope to preserve the fountain in the future. For a view of the original design plan of the fountain from TIMA’s collections, follow this link: 1889 Water Fountain Plan

In addition, TIMA owns and is the steward of the shore/landing site at the north end of Eastport’s waterfront for the seasonal Deer Island (New Brunswick, Canada) to Eastport (Maine, USA) ferry service when it is in operation. In an effort to preserve the ferry service, the property was gifted to TIMA in 2007 by John Pike Grady whose family had owned the property for more than a century.